They’re human too: Compassion is key in crisis diversion work

While many Edmontonians largely spent the past two years at home, people working with vulnerable community members have been filling in gaps and acting as essential extra eyes and ears on the street.

Molly Mcguire, a Crisis Diversion Worker with Boyle Street Community Services, has been doing this work since 2019.

“We try to help the vulnerable population and we advocate on their behalf and support them in a non-judgemental way to empower them and meet them where they’re at,” says Molly.

“Many of them are suffering from addiction and don't have supports in place or housing.”

By doing this work, the 24/7 Crisis Diversion program contributes to addressing issues of poverty, mental health and addiction by helping people connect with the best available resources to support their needs.

“We take a lot of calls away from EPS and EMS. A bridge gap between social services and emergency services,” says Molly. This is especially important during the pandemic, when emergency services are under even more extraordinary strains than normal.

In addition to diverting calls from emergency services, the teams are able to be extra eyes on the street, in areas that are often overlooked.

“One day we were driving around the back alleys and we just saw to the right, cardboard boxes stacked up. It kind of looked like someone was living there so we decided to check it out,” she recalls.

“We could clearly see that the client was overdosing and needed medical attention. We did administer naloxone to him three times and he came back around and was able to talk to us, but I'm sure if we didn’t pull that barricade down he probably would have died and no one would have known which would have been really sad.”

After providing the client with emergency help in the moment, the team was able to leave him in the hands of EMS.

During the pandemic, fewer people were out and about in the downtown core, and Molly feels sure the teams filled in the gaps as fewer concerned citizens were around to call for help in emergencies.

“He wasn’t the only person we helped in that area,” she says. “That was definitely a really crazy day.”

“It’s important for them to have time to do those drive-arounds and not always be on calls,” says Claire MacDonald, Project Coordinator for 24/7 Crisis Diversion at REACH Edmonton.

In addition to those specific calls, teams engage with upwards of 2,000 more people every month, above and beyond specific requests, and all these community member engagements are expected to increase as the weather gets warmer.

“I think it would be a lot harder on EPS and EMS if this program wasn't here,” says Molly. “A lot of calls we get, they would be taking because people would have no one else to call.”

“I think it’s really important because we do find a lot of people who might not have been found,” she says.

While the job can have intensely challenging moments, there are joys to be found in serving others.

She recalls one client, who was a minor, had been banned from local youth shelters and had nowhere to go.

“It was pretty clear he didn’t have supports in the city, so we called Child and Family Services and really advocated for someone to find him a spot,” says Molly. “We just had to get him to wait with us.

Hope Mission gave the youth a meal and Miram’s Footsteps transported him to the youth shelter in Camrose, where he was able to stay for the foreseeable future.

“We’re not just going to leave him at an LRT station,” she says. “Those days, it makes me feel very accomplished because I know that person’s going to be safe. At the end of the day I know the person who was in distress is no longer in distress.”

At the end of each day, Molly and her colleagues are spreading a little more humane and compassionate care around the city, and they hope that attitude is contagious.

"I know a lot of people aren’t comfortable approaching the vulnerable population. But they’re the same as you and me, going to Tim’s to buy a coffee. It’s just their appearance sometimes people are responding to,” she says. “They're human too. I’m sure if you go say hello and ask if they’re ok you would see that.”

If you see someone in non-emergency crisis, call 211 and press 3 to reach the Crisis Diversion Team. 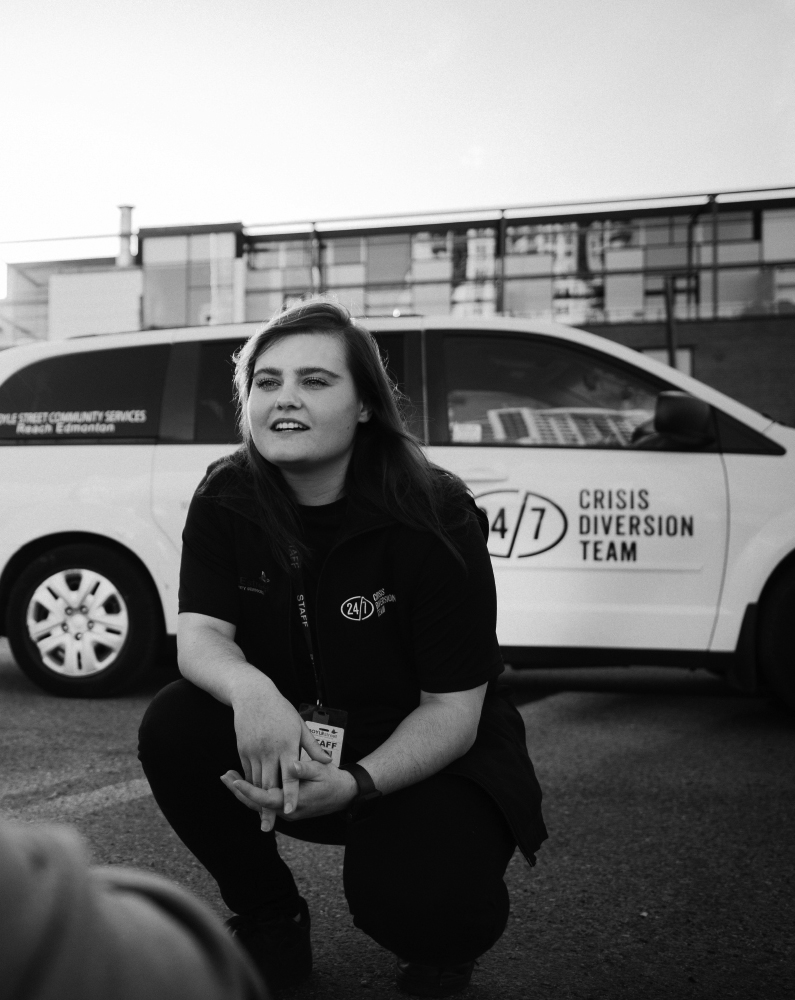