Crisis Diversion workers often go beyond the basic definition of their jobs.

Often, people on the street will ask Crisis Diversion workers for a Narcan kit, which they can’t supply because they need the ones they have for emergencies. And on this particular day, a teenager chased the Hope Mission rescue van down asking for Narcan. The Hope staff agreed to go to the location where their friend was overdosing.

“This individual told me he had just moved into a house and didn’t know the address and I could tell he had run quite a distance,” says Jarvis. “So I asked him to jump in the ambulance and take us to the scene.

Once they found the house and called 911, Jarvis explained who they were with and was given permission to enter the house, which is something Crisis Diversion teams normally wouldn’t do.

“Everyone there was between 17 and 19 years old,” says Jarvis. “Once I went in I saw this 17-year-old was not in good condition, his lips were very blue and he had clammy, cold skin.”

He was able to check his vitals and found his oxygen was very low and his heart rate was in the 100s, so they gave him two doses of Narcan and a sternal rub while waiting for EMS to arrive on the scene, when the patient started to regain consciousness.

“I was able to pass my monitor readings and levels to the chief paramedic supervisor, so basically he figured this kid probably had about one minute to survive prior to us arriving,” says Jarvis. “And it took paramedics 5 minutes to get there. That kid may not have lived if we had not got into that house.”

EMS took the time to honour Jarvis  with an award for his work on that day because he went beyond his basic responsibilities to help save this young man’s life.

“This was singled out because it’s not something we normally would do,” he says. “We wouldn't go to closed-in places.”

It turned out there was a phone and a Narcan kit in the house, but the teens were in such shock and distress over their friend they couldn’t think of anything other than running into the street to look for help.  A lot of times people get scared just because they’re not trained.”

“I felt pretty calm about the whole thing,” says Jarvis. “Part of my back story is I've been in a lot of these types of houses. I’m very comfortable with going into these kinds of situations.”

With his own history of addiction, Jarvis has been working with people in recovery for years, starting in Hinton and Edson before moving to Edmonton.

Since moving to Edmonton a few years ago, he made the shift in careers to focusing on this kind of work full time after losing a friend of 30 years to a relapse and overdose in December of 2020.

“Through some prayer, after that, I called Roland, Hope Mission’s Crisis Diversion Supervisor, and said ‘I’m ready to come on board’,” he says.

Jarvis has been with Hope Mission full time for over a year now.

While doing this kind of work can be incredibly stressful and burnout takes its toll, knowing that the work is saving lives makes all; the difference.

“A little over six months ago I was off Whyte Ave. on a side street and I saw a guy on the ground and he was overdosing so we revived him and got him in the back of the ambulance,” Jarvis recalls.

After the man was revived, he shared his story with the man and they prayed together.

“Months later, I met this one individual that’s in the men’s group and some other groups, and he just got his six month chip,” he says.  ‘I know you,’ he says, and tells me he was  trying to connect with me. He was the individual I revived on Whyte Ave. We shared and prayed, not knowing he came to Christ in the back of the Hope Mission van, and since then he hasn’t used. He goes to lots of meetings and church groups with me now.”

Jarvis credits interactions like these with helping him keep doing the work he’s doing.

“At that time, I was finishing my studies to be an addictions counsellor and was hitting burnout. Seeing people turn their lives around after coming so close to losing them makes all the difficult work worthwhile.”

“It’s a lot of work and straining but so rewarding,” he says. The rewards are far greater than everything else.” 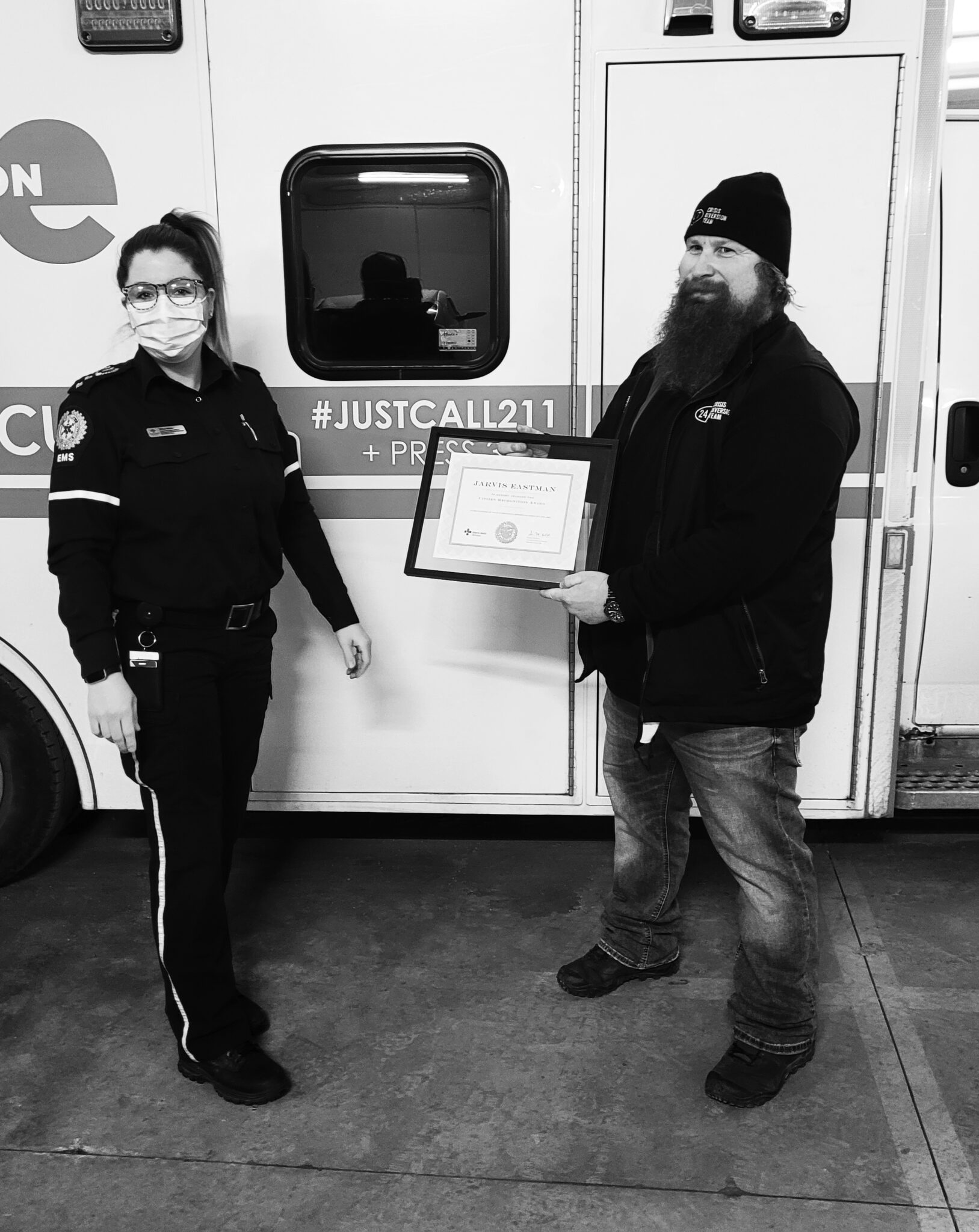